Welcome to the Weston Chain Gang forum. We are a group of cyclists that ride regularly from Weston-super-Mare. We meet at Priory school on Saturday at 8:45. Rides vary in distance between 60 and 100 miles with a stop for cake. Ridet nec genere!

You are not connected. Please login or register 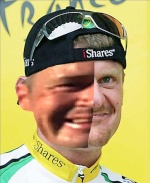 Roll up, Roll up!

it's that time of year again, la grande boycie sets off from Norman D on saturday.

just think how boring it would be if we all wanted froomy to win again (or even one of the brit's.)

so, to ensure there's no accord within our ranks, we all need a different rider to cheer on (and, by virtue, 179 riders to hate) over the next month.

so, £1's in and on saturday 2/7 we'll draw names at the cafe stop. i've cast my expert eyes (using william hill) over the field and narrowed it down to the likely GC winners.

here they are, from the top:

That's Bill Hill's top 31, we'll see how many people wish to be entered (so to speak) and draw that many riders form the top; in the unlikely event that none of these win, the top rider from this selection shall be deemed the winner.

here are the full rules:


i know, complicated....... however there are 3 more most vital rules that supersede the others...

rule 4. the rider you draw is your rider for the tour, 'he is a surefire winner, has never been involved in any scandal (drugs or podium girl related) and his nationality (culture, language etc.) is the best in the world.

rule 5. all other riders are crap..... (basically the opposite of rule 4) & anyone who supports another rider is deluded &/or a total knob

rule 6. when referring to the sweepstake, you must pronounce all rider's names with a geordie accent (especially all the spaniards, nighhhaaarrewww quinnn tah nahhhh and tineeeeee peeeeennO)

... if we can all stick with these rules it should be a happy and peaceful july.
showmethecakes

Won't be out Saturday but would love to have one of those guaranteed winners you have listed. If Bill Hill can credit me £1 for a week or so can someone sensible pick a rider for me. None of your usual pranks like the well known Katusha rider Tossimov or the Italian rider Cappaccino etc.